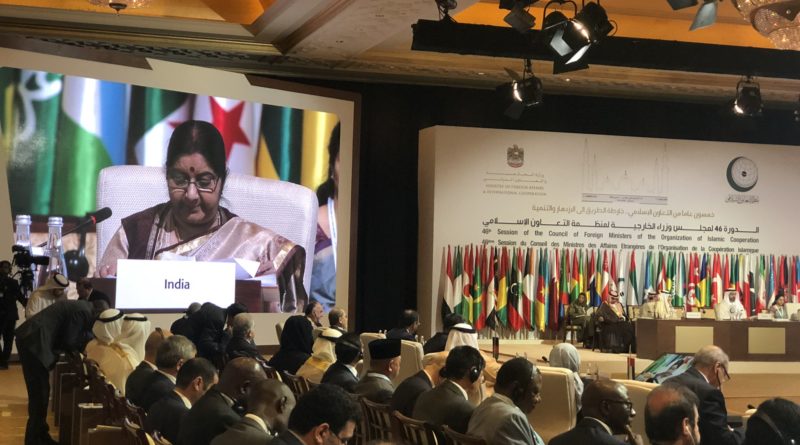 Abu Dhabi – External Minister of India, Shrimati Sushma Swaraj addressed the OIC meeting on Friday with the verse of the Holy Quran and reiterating the point that “Islam means Peace, and none of Allah’s 99 names means violence”.

Swaraj was invited for the first time by UAE for the inaugural plenary of Organization of Islamic Cooperation (OIC) to represent 185 Million Indian Muslims, among all the other 57 Islamic countries.

“Terrorism and extremism bear different names and labels. It uses diverse causes. But in each case, it is driven by distortion of religion, and a misguided belief in its power to succeed. The fight against terrorism is not a confrontation against any religion,” Swaraj said.

Fakhruddin Ali Ahmed, a senior minister in Indira Gandhi’s cabinet who later became President, was invited to attend the Rabat conference in 1969 and then disinvited at Pakistan’s instance after he arrived in the Moroccan capital.

Since then, India has been excluded from all OIC deliberations.

Sawaraj during her address read a verse from the Holy Koran which says ‘La Ikrah fiddeen’ — Let there be no compulsion in religion.

“Just as Islam literally means peace, none of the 99 names of Allah mean violence. Similarly, every religion in the world stands for peace, compassion and brotherhood,” she said.

“I carry the greetings of 1.3 billion Indians, including more than 185 million Muslim brothers and sisters. Our Muslims brothers and sisters are a microcosm of the diversity of India itself,” the minister said and asserted that “very few” Muslims in India have fallen prey to the poisonous propaganda of radical and extremist ideologies.

She asserted the point that she represents the land that has been a fountain of knowledge for ages, a beacon of peace, and a source of faiths and traditions.

However, during her entire 17-minute speech, she did not mention Pakistan.

“They have diverse culinary tastes, myriad choices of traditional attire, and they maintain strong cultural and linguistic heritage of the regions they loved and have lived for generations. They practice their respective beliefs and live in harmony with each other and with their non-Muslim brethren,” Swaraj added. 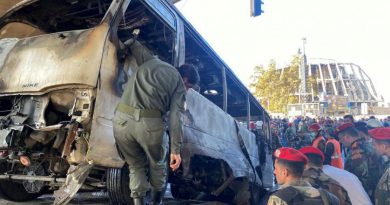 Syrian military: Attack on bus kills 13, most of them troops 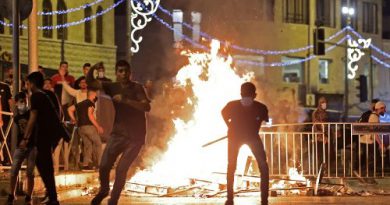