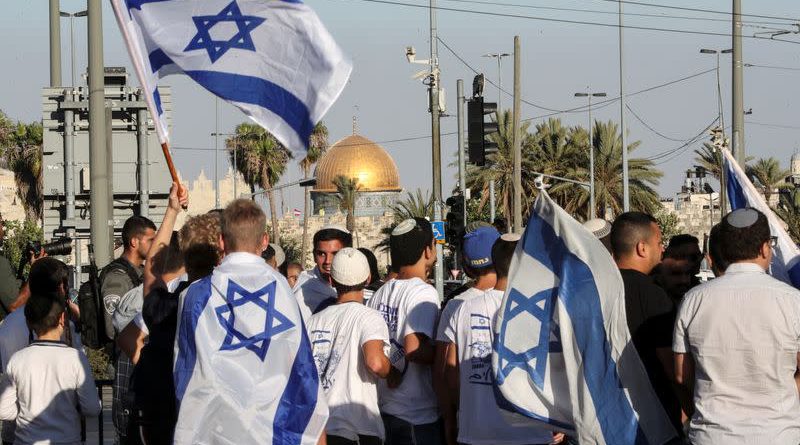 Jerusalem (Reuters) – Thousands of Israeli far-right nationalists marched in a flag-waving procession through East Jerusalem on Tuesday, an event that risked reigniting tensions with Palestinians and posed an early challenge to Israel’s new government.

On Tuesday, Israeli police in riot gear and on horseback cordoned off areas leading to the walled Old City’s flashpoint Damascus Gate, clearing the area of Palestinians.

Dancing and singing “the people of Israel live” the crowd of mostly religious Jews, carrying blue and white Israeli flags, then filled the plaza in front of the gate, usually a popular social gathering spot for Palestinians.

“Take a good look at our flag. Live and suffer,” one marcher, a megaphone in one hand and a cigar in the other, shouted in Hebrew at Palestinian merchants on the other side of police barriers erected on an East Jerusalem street.

Police were expected to prevent marchers from going through Damascus Gate, the main entry to the Muslim Quarter of the Old City, which is also home to shrines sacred to Judaism, Islam and Christianity. They were to take a peripheral route instead, to Judaism’s sacred Western Wall.

“Jerusalem is for all religions, but Jerusalem is in Israel. And in Israel, we must be able to go wherever we want, with our flag,” said marcher Doron Avrahami, 50, channelling right-wing frustrations with police restrictions.

Assailing the march as a “provocation”, Palestinians called for “Day of Rage” protests in Gaza and the Israeli-occupied West Bank with memories still fresh of confrontations between Israeli police and Palestinians during the Muslim holy month of Ramadan.

“We warn of the dangerous repercussions that may result from the occupying power’s intention to allow extremist Israeli settlers to carry out the Flag March in occupied Jerusalem,” Palestinian Prime Minister Mohammad Shtayyeh said.

Before the marchers arrived at Damascus Gate, thousands of Palestinians congregated nearby and at least 17 were injured in clashes with Israeli police firing stun grenades, the Palestine Red Crescent ambulance service said.

Several hours before the event was due to start, incendiary balloons launched from Gaza caused several fires in fields in Israeli communities near the border with the Palestinian enclave, witnesses and the Israeli fire brigade said.

Such incidents had stopped with the ceasefire that ended last month’s Israel-Gaza fighting.

Hamas warned of renewed hostilities over the march, testing the mettle of the new Israeli government of Naftali Bennett, which approved the procession though along an amended route that appeared designed to avoid friction with Palestinians.

Bennett heads a far-right party, and diverting the procession could anger members of his religious base and expose him to accusations he was giving Hamas veto power over events in Jerusalem.

Wedensday’s march was originally scheduled for May 10 as part of “Jerusalem Day” festivities that celebrate Israel’s capture of East Jerusalem in the 1967 Middle East war.

At the last minute, that march was diverted away from the Damascus Gate and the Muslim Quarter, but the move was not enough to dissuade Hamas from firing rockets towards Jerusalem.

Sitting on a bench outside the police cordon, Khalil Mitwani, a 50-year-old Palestinian, said of the marchers: “They are making a big problem in Jerusalem. All the people here want peace – why make problems here?”

Diplomats urged restraint by all sides.

He called on all parties to “act responsibly & avoid any provocations that could lead to another round of confrontation”.

Israel, which occupied and later annexed East Jerusalem in a move that has not won international recognition, regards the entire city as its capital. Palestinians want East Jerusalem to be the capital of a future state that would include the West Bank and Gaza. 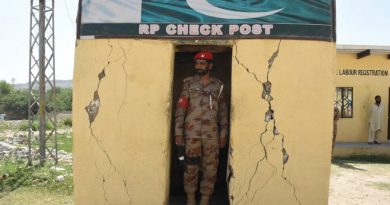 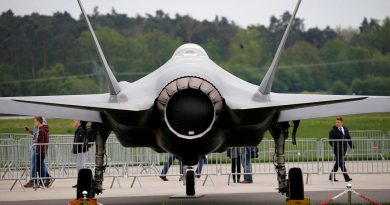 UAE told the U.S. it will suspend talks on F-35 jets – Emirati official 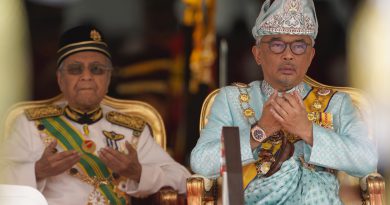