London (Reuters) – Britain on Monday described Iran’s decision to bring a new case against detained British-Iranian aid worker Nazanin Zaghari-Ratcliffe as appalling and said she should be allowed to return home to rejoin her family.

The British government summoned the Iranian ambassador last week after the news that Zaghari-Ratcliffe was to be recalled to court in Iran.

“It is appalling that Iran has begun a new case against Mrs Zaghari-Ratcliffe and have threatened her with being returned to prison. The Iranian authorities have put an intolerable burden on Nazanin and her family,” British foreign minister Dominic Raab said in a statement.

“I am relieved she remains on temporary release, but she needs to be returned home to her family. We continue to make this clear in the strongest terms.”

A project manager with the Thomson Reuters Foundation, the dual national was arrested in April 2016 at a Tehran airport as she prepared to head back to Britain with her daughter after a family visit.

She was sentenced to five years in jail after being convicted of plotting to overthrow Iran’s clerical establishment. Her family and the foundation, a charity that operates independently of media firm Thomson Reuters and its news subsidiary Reuters, deny the charge.

Zaghari-Ratcliffe was temporarily released from jail in March in response to concerns about the spread of COVID-19 in Iran’s prisons, but her movements are restricted and she is barred from leaving the country.

Lawmaker Tulip Siddiq said she had spoken to Zaghari-Ratcliffe’s husband, who said she had been taken to court, and that the trial was adjourned before she could put forward a defence.

“No date for next hearing, but also no prison & she is back home with her parents,” Siddiq said in a tweet. 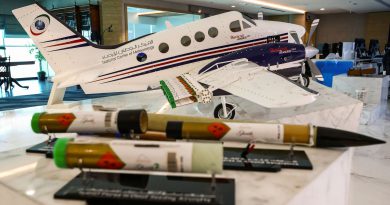 Swiss probe leads to arrest of four suspected of ties to ISIS, al-Qaida